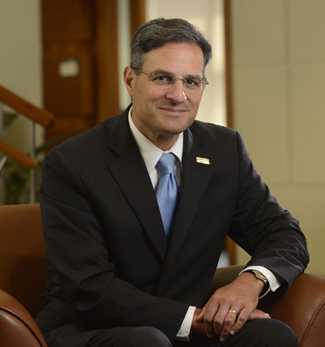 New Brunswick, N.J., December 19, 2014 – Aiming to increase treatment options for prostate cancer patients who have an early relapse, investigators from a multi-institutional cooperative group – including Rutgers Cancer Institute of New Jersey – have demonstrated that a vaccine therapy that stimulates the body’s own immune defenses can be given safely and earlier in the course of prostate cancer progression.

As part of a Phase II clinical trial, adult patients with advanced prostate cancer (as evidenced by two rising prostate-specific antigen or PSA values and no visible metastasis) whose cancer is resistant to hormone therapy and had either surgery or radiation were recruited from member institutions in the ECOG-ACRIN Cancer Research Group. In their work, published in the current online edition of European Urology (doi: 10.1016/j.eururo.2014.12.010), ECOG-ACRIN investigators examined two different experimental treatment options.

In step one, patients were treated with PROSTVAC-V/TRICOM and PROSTVAC-F/TRICOM. PROSTVAC-V is derived from a vaccinia virus that was used for many years to vaccinate against smallpox. This virus is modified to produce a PSA protein that helps focus the body’s immune response to the PSA in the prostate tumor. In addition, it is modified to produce three other proteins that help increase an immune cell’s ability to destroy its target (TRICOM). PROSTVAC-F is made from the fowlpox virus, which is found in birds and not known to cause any human disease.  It contains the same genetic material as PROSTAC-V, but is given multiple times to further boost the body’s immune system.

Patients in the study were given one cycle of PROSTVAC-V/TRICOM followed by PROSTVAC-F/TRICOM for subsequent cycles in combination with a drug known as GM-CSF. GM-CSF is a protein normally made by the body to increase the amount of certain white blood cells and make them more active. When in drug form, it is used to boost the body’s immune system to fight off disease.  After six months from first treatment, 25 of 40 eligible patients (63 percent) were found to have no disease progression and experienced minimal toxicity.  Median pre-treatment PSA velocity was 0.13 log (PSA)/month as compared to median post-registration (six months) velocity of 0.09 log (PSA)/month, which represents an improvement in PSA doubling time from 5.3 months to 7.7 months.  The second part of the study included the addition of hormone therapy (androgen ablation) to the PROSTVAC-VF/TRICOM combination. In the 27 patients eligible for this step, 20 patients (74 percent) experienced a complete response at seven months.

“Previous studies by the ECOG-ACRIN Cancer Research Group and others have shown it is optimal to explore agents like PROSTVAC that harness the body’s own defenses in shutting down cancer. With our current findings demonstrating the safe use of combination vaccine therapy earlier in the course of prostate cancer progression, we are laying the groundwork for future immunotherapy options for this patient population,” says Cancer Institute of New Jersey Director Robert S. DiPaola, MD, who is the lead author on the publication. Dr. DiPaola and colleagues note that while this research is supportive of larger federally-funded studies, this study is limited by the small number of patients and the absence of a control group.

The study was supported in part by Public Health Service Grants CA23318, CA66636, CA21115, C80775, CA49883, CA16116, CA21076, and by the National Cancer Institute (NCI), National Institutes of health and Department of Health and Human Services.  Its content is solely the responsibility of the authors and does not necessarily represent the official views of the NCI.

About the ECOG-ACRIN Cancer Research Group
The ECOG-ACRIN Cancer Research Group is a multidisciplinary, membership-based scientific organization that designs and conducts biomarker-driven cancer research involving adults who have or are at risk of developing cancer. The Group was formed in May 2012 by a merger that combined the complementary strengths of the Eastern Cooperative Oncology Group (ECOG) in cancer therapy and the American College of Radiology Imaging Network (ACRIN) in cancer imaging. ECOG and ACRIN were two highly respected NCI-sponsored cancer cooperative groups. ECOG-ACRIN comprises nearly 1100 member institutions in the United States and around the world. Approximately 12,000 physicians, translational scientists and associated research professionals from the member institutions are involved in Group research, which is organized into three scientific programs: Cancer Control and Outcomes, Therapeutic Studies and Biomarker Sciences. ECOG-ACRIN is supported primarily through NCI research grant funding, but also receives funding from private sector organizations through philanthropy and collaborations. It is headquartered in Philadelphia, Pa., as is PrECOG LLC, a not-for-profit company that partners with ECOG-ACRIN and industry to develop and conduct clinical trials in all areas of oncology. For more information, visit www.ecog-acrin.org or call 215.789.3631.