Research in the Montagna Laboratory at the Rutgers Cancer Institute of New Jersey aims to understand the mechanisms by which genomic instability promotes tumor initiation and progression. Using advanced molecular cytogenetic approaches and single cell genomics methodologies applied to human and murine in culture and in vivo models we investigate the roles of large copy number alterations and papilloma virus insertional mutagenesis to tumor initiation and progression.

Aneuploidy in aging and cancer risk

Age is the single biggest risk factor for cancer. Genome instability has long been implicated as the main causal factor of aging and it is a hallmark of cancer (Andriani et al.). An active area of investigation in the laboratory is to elucidate the molecular mechanisms by which age-related increased genomic instability leads to increased cancer risk. In previous studies, we uncovered unexpectedly high levels of age-related accumulation of whole chromosome aneuploidy in the aging mouse brain (Faggioli et al., Andriani et al.). We showed that aneuploidy is sufficient to induce senescence, a cell cycle arrest often accompanied by a senescence associated secretory phenotype (SASP) which can alter the surrounding microenvironment (Andriani et al.). Using single cell genomic analysis (Andriani et al., Faggioli et al.) of postmortem human brain tissues our current work aims to define the cells and the brain areas in which genomic instability arise during aging and study how this process increases cancer risk. These experiments combined with in culture 3D cortical spheroids and murine models in which the fate of aneuploid brain cell types can be traced are expected to define the contribution of aneuploidy to disease, establish the molecular pathways altered in the presence of aneuploid cells and investigate if and how somatic cells with an abnormal chromosome number are identified and eliminated (Baker and Montagna).

Haploinsufficiency of BRCA1 and BRCA2 functions and tumor risk 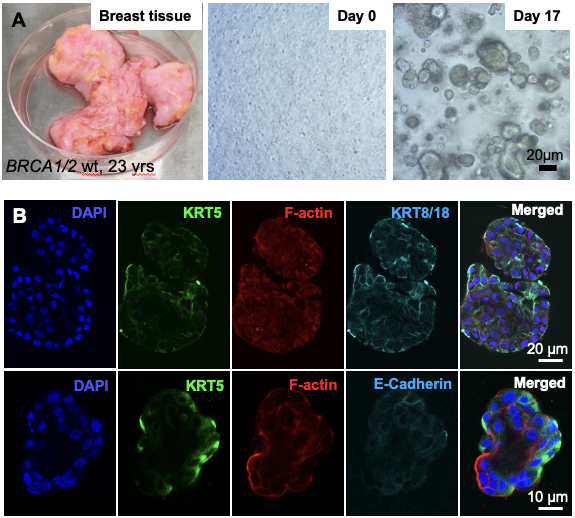 Most cervical cancers are caused by human papillomavirus (HPV).  HPV is also the etiological agent that promotes tumorigenesis in a fraction of other types of cancer (e.g., head and neck, vulvar, anal and penile cancer). High-risk HPV types infect epithelial cells of the cervix where the viral DNA genome replicates as an episome. In most cervical tumors and in a subset of other HPV associate cancers, HPV DNA is integrated into human genomic DNA.  Although likely infrequent events, HPV DNA integrations can cause stable association of the oncogenic viral E6 and E7 genes with a host cell and its descendents, result in the virus DNA causing alterations in transcription of human cancer genes flanking the insertion sites, and somehow cause rearrangements of human genomic DNA near the inserted HPV DNA, thus contributing to tumorigenesis in multiple ways. The Montagna lab has developed methodologies to detect and map HPV-human DNA junctions at single nucleotide resolution and established molecular cytogenetic approaches to study the clonal evolution of cells with integrated HPV DNA (Van Arsdale et al.). Studies are ongoing to define clonal expansion of cells with integrated HPV in histological tissue samples of premalignant cervical lesions, and to study the functional consequences of HPV DNA integration on cell phenotypes and cell fates. 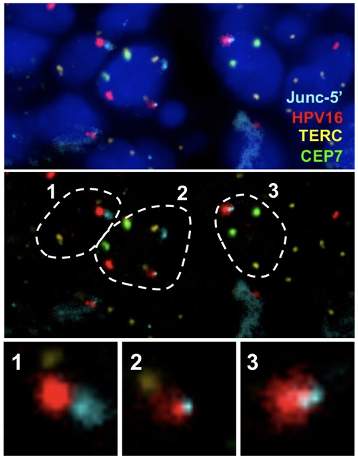 Visualization of HPV16 insertion by Junc-FISH in a CIN3 sample. An HPV16 insertion detected in a CIN3 sample by HC+NGS identified a viral DNA insertion between Chr2:125,862,000 and 125,911,000, accompanied by a ~49kb deletion of human sequences. Custom FISH probes were generated using Bacterial Artificial Chromosome (BAC) RP11-632F4 (Junc-5’) on Chr2:125,741,932-125,918,993 spanning the integration mapped by HC+NGS. Probes for the telomerase RNA component (TERC) gene reported as amplified in cervical cancer as well as a chromosome 7 enumeration probe (CEP7) were also included.

SEPT9 is a member of a family of filamentous GTP-binding proteins that assembles into filaments and rings. We discovered that some breast tumors harbor genomic amplification of Sept9 in the form of acentric chromosomal fragments known as double minutes (dmin) chromosomes, extra-chromosomal bodies of circular DNA containing mainly oncogenes (Montagna et al.). In our previous work we found that SEPT9 assembled into filaments that colocalize with invadopodia and FAs and that overlapped with the gelatin degradation patterns implying that the ECM degradation may be, at least in part, mediated by SEPT9 (Marcus et al.). Work is ongoing to establish the mechanism by which SEPT9 amplification and over expression promotes tumor cell invasion in metastatic carcinomas

Research in the Montagna laboratory is supported by The National Institutes of Health (NIH) and The Department of Defense (DoD) Breast Cancer and Ovarian Research Program.