Our laboratory continues to evaluate approaches to modulate the tumor microenvironment using recombinant vector systems. We found that vaccinia had all of the required and ideal features. Initial murine studies followed by a series of Phase I trials of vaccinia vector alone in patients with recurrent melanoma (intralesional) and bladder cancer (intravesical) demonstrated that viral vector could be given repeatedly with effective tumor infection/transfection seen despite growing neutralizing antibody titers. These studies led to our generation of the first-in-class oncolytic virus expressing GMCSF using a vaccinia vector as a potential therapeutic.  Phase I study in patients with recurrent superficial melanoma demonstrated elimination of infected tumor and more importantly noncontiguous distant lesions consistent with the generation of a systemic tumor specific response. Awarded US patents (6,093,700; 6,177,076; & 6,475,999) have been licensed to Jennerex/SillaJen and the agent is being studied in Phase III liver cancer as Pexa-Vec. More recently we have completed an NCI-sponsored investigator initiated trial of non-replicating fowlpox GMCSF in patients with bladder cancer prior to resection (NCT-00072137), which showed similar levels of gene transfection. 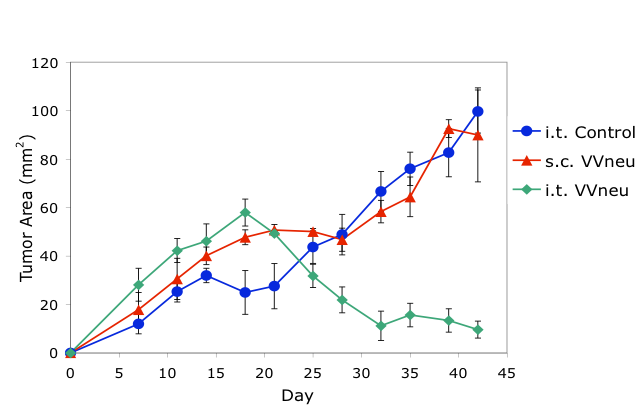 In further dissecting the tumor microenvironment in multiple murine models, we determined that there were a significant number of effective CD8+ tumor antigen specific T cells in the TME held in check by antigen specific T regulatory cells in a bladder model and myeloid derived suppressor cells in an orthotopic breast model.  While intratumoral oncolytic vaccinia encoding GMCSF was insufficient to overcome these inhibitory populations which were producing in both cases systemic anergy to tumor antigen, we demonstrated that immunizing intratumorally with virally encoded antigen could expand the effector population and overcome the systemic anergy. This led to a first-in-man Phase I study of intratumoral antigen encoding pox in patients with locally advanced inoperable pancreatic cancer (NCI/CTEP-sponsored investigator-initiated trial NCT 00669734). Of note, 8/8 patients presenting with no liver metastases failed to develop metastasis in the liver, which is a hallmark of this stage disease. This finding is consistent with our murine studies and suggests that our intratumoral, as opposed to systemic immunization, may allow effective development of antitumor responses (under study) and have the potential of being the first effective vaccine to prevent metastases in pancreatic patients. Most recently we are studying the role of autophagy in tumor and host immune populations for its role in antigen presentation and the development of effective tumor specific immunity. We are also studying the role of increasing DNA and mitochondrial mutations on the response to tumor in the TME.

Employment Opportunities
If you are interested in working or volunteering in the Lattime Lab, please contact Dr. Lattime directly at lattimec@cinj.rutgers.edu.