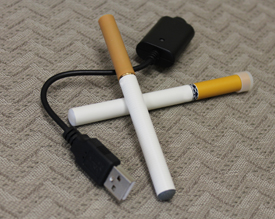 New Brunswick, N.J. – As the U.S. Food and Drug Administration (FDA) is preparing to issue a final ruling on whether it will extend its tobacco regulatory authority to electronic cigarettes (e-cigarettes), researchers from Rutgers Cancer Institute of New Jersey and Rutgers School of Public Health have identified strong support for a number of e-cigarette policies among smokers.

The authors used nationally representative data from an online survey that captured 519 current smokers during a two-week period in April 2014, just prior to the announcement of the FDA’s proposed rule. Current smokers were adults who ever smoked 100 tobacco cigarettes and now smoke some days or every day.  Nearly half (46 percent) of these participants were also current e-cigarette users. Those participants were defined as smokers who had used e-cigarettes in the past 30 days.  Former e-cigarette users made up 62 percent of the overall tobacco smoking group and were defined as those who had ever tried the devices but had not used them in the past 30 days.

“One finding of note in this work is that nearly two-thirds of respondents did not realize e-cigarettes are not regulated under any government agency – possibly leading to a false sense of security about the safety of the devices.  But when respondents were prompted, a vast majority of them believed they should be regulated by the FDA for both quality and safety. As the FDA prepares to issue a final rule regarding e-cigarette regulation, it is important to have such data,” notes Dr. Wackowski, who is the lead author and principal investigator of the study.

More than half (55.5 percent) also supported advertising restrictions for the devices.  “Exposure to tobacco advertising is a risk factor for youth tobacco use and while cigarette marketing is considerably restricted in the U.S., e-cigarette companies have no such restrictions and spend millions advertising their products in magazines, at promotional events and on TV.   Youth e-cigarette experimentation is rising, and so it is encouraging that there is support to restrict e-cigarette advertising,” says Dr. Delnevo, study co-author and professor and chair of health education and behavioral science at the School of Public Health. The research also showed that support was lower for policies restricting flavoring of e-cigarettes (44.3 percent) and restriction of indoor use of e-cigarettes (41.2 percent).   However, authors note that support for indoor e-cigarette restrictions could increase over time, similarly to how smokers’ support for policies to ban indoor smoking of tobacco cigarettes has increased with time and with the passage of such policies.

“It was also interesting to find in this study that even though smokers largely believe e-cigarettes are less harmful than tobacco cigarettes, almost 90 percent nevertheless agreed that e-cigarettes should carry warning labels, something they are not required to do at the moment,” Wackowski added. The FDA’s regulatory proposal only suggests one nicotine addiction warning, and Wackowski aims to develop and pilot test a series of warnings that may be appropriate for e-cigarettes in a new research project funded by the FDA’s Center for Tobacco Products. The authors also note future studies may also want to measure policy attitudes with larger samples and examine the attitudes of non-smokers. They also recommend further exploration on other policy issues such as e-cigarette taxation and internet sales and how policy perceptions correlate with knowledge and beliefs about e-cigarettes.

The research was supported in part by the New Jersey Health Foundation, the FDA Center for Tobacco Products (K01CA189301), and the National Cancer Institute (NCI) – part of the National Institutes of Health (NIH) – under grant numbers P30CA072720 and K01CA189301. The content is solely the responsibility of the authors and does not necessarily represent the official views of the FDA, NCI or NIH.

About Rutgers School of Public Health
The Rutgers School of Public Health provides an exceptional, high-quality education that is accessible, affordable and designed to accommodate both working professionals and full-time students.  The School offers five degrees, including the Master of Public Health (MPH), an MS in Biostatistics, an MS in Health Outcome, Policy, and Economics, a PhD in Public Health and the Doctor of Public Health (DrPH), as well as a number of dual degrees and post-baccalaureate certificates.  With educational opportunities offered in New Brunswick, Newark and Stratford, the School is conveniently accessible across the state.  There are eight departments, including Biostatistics, Environmental and Occupational Health, Epidemiology, Health Education and Behavioral Science, and Health Systems and Policy in New Brunswick; Dental Public Health, Quantitative Methods: Epidemiology and Biostatistics, and Urban Health Administration in Newark; and Health Systems and Policy in Stratford.  Students have opportunities to participate in leading public health research and can put their public health education into practice through participation in the School’s international health or community service projects.  Numerous continuing education opportunities for public health professionals are also available.