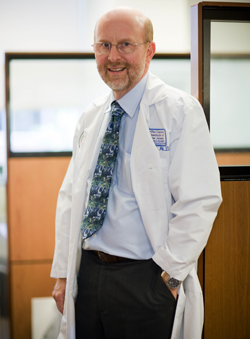 Edmund C. Lattime, PhD, is the deputy director at the Cancer Institute of New Jersey, as well as the associate director for education and training.  He also is a professor of surgery, director of surgical oncology research and professor of molecular genetics, microbiology and immunology at Robert Wood Johnson Medical School.

Dr. Lattime is well known for his work in tumor immunology.  His laboratory studies the interaction between the tumor and immune response with the ultimate goal of developing effective immunotherapeutic approaches.

During his postdoctoral fellowship and subsequent ten years as a faculty member at Memorial Sloan-Kettering Cancer Center, Dr. Lattime carried out the defining studies into the identification and regulation of natural cytotoxic cells shown to have significant antitumor activity.  Also at Sloan-Kettering, his laboratory began studying the interaction between tumor and the immune response in patients with bladder cancer. These studies identified the tumor microenvironment as a target for therapy. In the late 1980s when he was recruited to Thomas Jefferson University, Dr. Lattime used data from these clinical and pre-clinical studies to further explore the modulation of antitumor immunity via drug/gene delivery to the tumor microenvironment.

Building from this work, his group ultimately developed a genetically engineered version of the smallpox vaccine virus (vaccinia) containing the gene for GMCSF – a substance naturally produced by the body’s immune system that stimulates immune recognition. They took the virus from preclinical validation to the generation and regulatory approval of a human grade virus used in their first-in-man study in melanoma. The virus was patented and ultimately licensed to the Jennerex Biotherapeutics Company. It is currently in Phase II/III study in patients with liver cancer. Most recently, results from a Jennerex clinical trial of the virus was the focus of a publication in the journal Nature demonstrating for the first time a gene therapy given intravenously that localized and preferentially targeted tumor metastases.

When recruited to the Cancer Institute of New Jersey in 1998, Dr. Lattime and colleagues continued building on these previous findings.  They completed a first-in-human Phase I clinical trial sponsored by the National Cancer Institute (NCI) Cancer Therapy Evaluation Program, which focused on the treatment of advanced bladder cancer tumors with a human-engineered fowlpox virus. Most recently, Dr. Lattime’s laboratory has identified the effectiveness of intratumoral immunization with a related vaccinia-based tumor vaccine.  Teaming with the Cancer Institute's Gastrointestinal Tumor Study Group, they have translated these latest findings to an innovative Phase I study, also sponsored by the NCI, where patients are immunized directly into the pancreas using an engineered poxvirus containing tumor markers (antigens) expressed on pancreatic cancer. Early results of this study, presented this past November at a national scientific meeting showed that in four out of six participants, the direct-injection vaccine treatment was shown to be associated with clinically stable disease.

While research is a main component of his work, in his role as Deputy Director at the Cancer Institute, Lattime also is responsible for the Education and Training Programs at the center.  This includes The Governor’s Conference on Effective Partnering in Cancer Research, which was started in 2003, with the goal of raising the visibility of cancer research in New Jersey, and the Annual Retreat on Cancer Research in New Jersey, which brings together cancer researchers from across the state to present their findings and build statewide collaborations. He is also responsible for overseeing Faculty Affairs at the Cancer Institute.

Dr. Lattime’s research is supported by grants from the NCI.

A Boost for Pancreatic Cancer Research