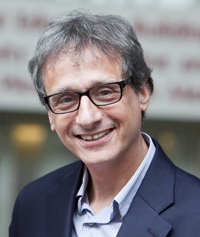 One may not think of probiotics -- like those found in yogurt that promote good digestive health -- as a weapon used in the fight against cancer.  But thanks to generous support from the Steven and Beverly Rubenstein Charitable Foundation, Inc., investigators at the Cancer Institute of New Jersey are now examining the effectiveness of probiotics as they relate to the outcomes of bone marrow transplant for patients with blood cancers.

Some patients with leukemia, lymphoma and myeloma are treated with an “allogeneic” bone marrow transplant where the donor is a blood relative or is unrelated, but has the same tissue type.  Donated cells can generate an immune attack against cancer cells in the patient, but they can also attack normal healthy cells and tissues. This attack, known as “graft-versus-host disease (GVHD),” is one of the major complications of transplant and occurs in the gastrointestinal (GI) tract in 25 to 40 percent of patients who undergo the allogeneic procedure.

When the GI tract malfunctions, bacteria in the colon can invade the body and cause severe infections that activate the immune system.  GVHD can then progress to the liver and other organs.  Probiotics are known to reduce the growth of certain types of bacteria.  Investigators at the Cancer Institute of New Jersey, who have already determined the probiotic lactobacillus GG is safe in relation to GVHD, are now exploring its effectiveness as part of the “PERFECT” (Probiotic Enteric Regimen For Easing Complications of Transplant) trial.  The research is being led by Roger Strair, MD, PhD, chief of hematologic malignancies/hematopoietic stem cell transplantation at the Cancer Institute.

“This funding from the Steven and Beverly Rubenstein Charitable Foundation allows us to build on our previous findings without interruption.  By further exploring the effects of probiotics on graft-versus-host-disease, we may be able to identify methods of preventing infection.  We are grateful for their support,” noted Dr. Strair, professor of medicine at Robert Wood Johnson Medical School.

Andrew Rubenstein is a trustee and manager of the Steven and Beverly Rubenstein Charitable Foundation -- named for his parents who instilled in him at a young age the importance of giving back.  With father Steven having passed away of acute myeloid leukemia, Andrew Rubenstein felt a connection to Strair’s work. “My father’s treatment stemmed from innovative research that was being conducted at the time.  By participating in that treatment, he understood the importance of advancing those latest findings.  Through our foundation’s support of Dr. Strair’s research, we hope to keep such advances moving forward,” he said.