Calm Courage in a Storm of Cancer

The Stacy Goldstein Breast Cancer Center at Rutgers Cancer Institute of New Jersey is unique. But so are some of its patients. Meet one with extraordinary spirit and a calm bright center.

In breast cancer circles, courageous stories of inspiration are plentiful and precious. We love them. We need them. After all, about one in eight American women will develop invasive breast cancer and their journeys offer hope and courage. Every once in a while however, there is someone who stands out from the rest. At Rutgers Cancer Institute of New Jersey, this is the story of Kriss Fierro, a 34-year-old mother who was diagnosed in October 2014. 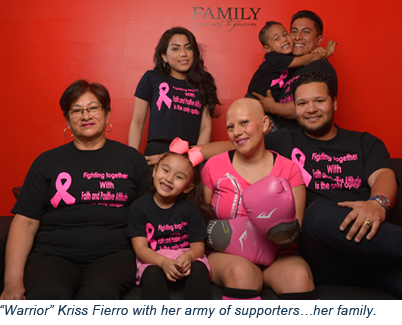 We arrange to meet in the Cancer Institute lobby and I arrive early. I watch nurses, security guards, front desk clerks and just about everyone interact with a pretty young woman who is also waiting for someone. There are hugs and sweet, soft-spoken interactions. They know her. She knows them. She’s a regular here, but a regular inspiration – not just another visitor. As she takes off her coat, a necklace gets snagged and I help free her to a mutual chorus of laughter about how this happens to every woman. I have no idea I have just met the cancer patient I’m supposed to interview. We sit down and it dawns on me. This is Kriss Fierro.

Aha. I should have known. Even Deborah L. Toppmeyer, MD, her oncologist, and director of the Stacy Goldstein Breast Cancer Center and chief medical officer at the Cancer Institute, recognized something special about this patient. “She is an inspiration with how she has fought her disease head-on with her positive outlook. Her attitude is simply extraordinary,” Dr. Toppmeyer says. “She is truly an angel who has touched so many hearts.”

“Kriss is a young woman with no significant risk factors for developing breast cancer. She did not inherit the breast cancer gene. This really came out of nowhere, like the majority of cases. We don’t usually know why somebody develops breast cancer,” Toppmeyer explains. “When I was examining her for the first time, I found a lymph node in her low anterior cervical area (the neck) that technically made her disease stage IV, not the initially diagnosed stage II. She cried.”

Toppmeyer is treating Fierro aggressively with chemotherapy “because hers is a localized disease.” She will go on to have surgery and then radiation followed by hormone therapy. At the Cancer Institute since 1995, this oncologist has helped countless patients navigate their journey through a comprehensive approach. “Through the years I’ve been involved in the design and implementation of clinical trials that offer promising new therapies targeted to specific types of breast cancer.” Unfortunately, Fierro didn’t qualify for any current trials.

“I think cancer patients are unique in a lot of ways,” Toppmeyer says. “Whenever they have an issue, you know it really is an issue. Oncology provides a very holistic approach to patient care and you deal not just with the cancer but with the whole person and their family. Patients develop all different complications and on that level it’s challenging, but the flip side is that you are on the journey with them and become an important part of their lives. The oncologist and person develop a unique bond. So far, Kriss’ response to chemotherapy has been very encouraging.” 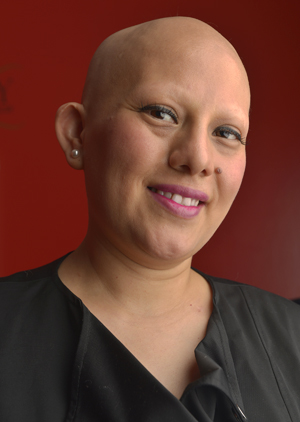 Fierro recalls the roller coaster of her life last fall. She had been doing what is called “insanity” exercise drills when her arm began to hurt more than it should have. The first doctor told her it was nothing to worry about but then she came down with appendicitis and ended up hospitalized. If it weren’t for her appendix, she might not have received treatment soon enough. “God works in mysterious ways,” she admits. Her advice to other women: “No matter what, if you feel something suspicious, push for a mammogram.”

“In the beginning you go through so many emotions. I was diagnosed with primary breast and arm cancer on October 9 but from that moment in the doctor’s office, my feelings were mixed. I cried but I knew that my mother and 4-year-old daughter Isabella were waiting outside for me. I felt peace inside and realized I needed to be strong and calm because it was going to be devastating for them,” she recalls.

This was the first meeting with surgical oncologist, Laurie Kirstein, MD, FACS. “As a breast surgeon, I am often the first member of the team to meet a patient and my personal philosophy is to make sure each patient is educated about her disease and her treatment options,” Dr. Kirstein says. “This often makes a scary process a bit easier.” “It makes a huge difference when you are battling for your life to have such an amazing, caring team battling with you,” Fierro says. “I keep all of them, those beautiful medical assistants and precious nurses, in my heart.”

Fierro approached her scary diagnosis with a strong faith, optimism and a remarkable grace. “This cancer is not going to be the end of me,” she insists. “There is a purpose for it. And for me, this battle, my battle, is about sharing love and kindness. If you give love and kindness to others, when you are in the worst battles, this is what you will receive back. It’s been amazing to feel the love of so many people. My beautiful mom is a worrier but I told her, ‘Everything is going to be okay.’ We are all united together in love. She cried a lot and so did my husband Danny who was devastated. It wasn’t easy for him because he couldn’t understand why it happened to me. But we shared the news with our family here and far away in Mexico, Spain, the Dominican Republic, Japan, Virginia, Michigan, Los Angeles and New York, as well as with friends and co-workers here in New Jersey. I asked them all to stand strong for me. I was going to stay strong,” she says. “Danny’s heart is calm now because I have such an amazing medical team and he has seen my strength. I’ve chosen to be honest with everyone, to share with them and to push hard. I truly believe this is my purpose, to touch hearts with positive love.”

While we are talking, she pulls a gorgeous bright pink T-shirt from her bag which proclaims: “Cancer messed with the wrong woman! Fighting with strong Faith and Positive attitude is the only option!!” She designed it herself and also one for supporters ⎯ and there are hundreds of them ⎯ her “army,” she announces. Out from her bag comes a black T-shirt with another line: “Supporting our Warrior Kriss.” A key word here is “warrior,” which is how she defines herself.

“I told cancer, ‘Don’t think you are going to scare me.’ Don’t give cancer the time to think it is winning. When I lost my hair, I said, ‘This is not going to make me lose my self-esteem. My beauty is beyond what is on the outside.’” She had warned her daughter that Mommy’s hair was going to fall out, but Bella, like her mother, was unfazed, “Mommy, your hair is going to grow back.”  In fact, Bella helped with the makeup for her new hair-free look and was soon heard ordering family members, “Tell Mommy she looks beautiful.”

“Cancer is not just a physical thing. It’s mental. I insisted that it was not going to be so awful.” Even pain was just part of the battle. “It didn’t matter what stage the cancer was. I was only going to push that much harder. I dance and sing, ‘I’m feeling great. I’m so strong,’” She also adopted Alicia Keys’ song, “Superwoman” to fight her way through symptoms. “Don’t let your body tell your brain it is sick,” she adds. “Tell your body to heal.”

At the Cancer Institute, she shares her warrior mentality anywhere and with anyone who may need it. The lobby is not off limits. She met a fellow cancer patient in the reception area. Though surrounded by family this patient was not coping well emotionally. “Her family was trying to comfort her but I felt her heart was devastated.” Watching from nearby, Fierro felt compelled to go to her. “I told her I was going to be there at her first chemo and I’ve been standing by her since. I keep my promises. She was not alone in this battle. We are invincible warriors together.  And as I left the Cancer Institute that day, I told my husband, ‘This is my God-given purpose.’”

Last Christmas season, Fierro even dressed as Mrs. Claus and accompanied by Danny, family and friends, joyfully delivered 120 toys to pediatric cancer patients at the Cancer Institute – toys which were purchased with funds raised by her supporters. “We also helped five needy families. Real kindness,” she believes, “is to give when you are also in need.” She has now started the Kriss Fierro Fund to bring smiles, kindness and love to other warriors.

On the day we meet, she is near the end of five months of weekly chemotherapy and absolutely elated because “the tumors are gone.” That slogan on her pink t-shirt comes instantly to mind: “Cancer messed with the wrong woman.” She’s praying for a lumpectomy, not a mastectomy.

Fierro was born in Mexico City and came to the U.S. when she was 15 on a scholarship to learn English. When she developed pneumonia, her mother and 8-year-old-brother Lenin joined her. “I was so sick,” she recalls. They stayed but life was not easy. Always a hard worker, Fierro found a job on the night shift at Barnes and Noble as a packer from midnight to 7 a.m. so she could attend school during the day. Working her way up, she is now an operations supervisor, managing a team of more than 75. She only recently took time off. “I was not going to lie down in bed,” she insists. She does yoga daily and has become a vegetarian, eating only organic foods. “I drink lots of juices and eat salads but you lose your taste buds during chemotherapy.” Even when she developed mouth sores, she forced herself to eat.  “Your mind controls so much about your body.” For months, she’d get chemotherapy on Thursdays and, no matter what, be back at work on Saturdays.

In 2012, Barnes and Noble featured Fierro in the “Career Path” series of their newsletter, Bookseller Profiles. “I grew up in the company and it’s more than a job for me,” she says. “It’s a second home. In my 15 years there, I’ve had the most amazing opportunities and been blessed with meeting honest, kind people who open their hearts to me. No matter what, they are there. I shared my news about cancer with all of them, not giving space for anyone to be negative or destructive.”

This “army” of special people has been raising money with Fierro’s special T-shirts, participating in walks, lunches, events and simply being there physically and emotionally for her. Even people who have moved away over the years are back in touch. Her cancer has actually brought distant families closer. As proof, she opens her pocketbook and pulls out handfuls of holy cards, notes, medals, bracelets, charms, gems and very personal pieces representing all kinds of religions, some sent from as far away as India ⎯ all meant to help in her fight for life. We both marvel over this amazing assortment with so much meaning behind each piece. “My battle is connected to people united all over the world. It’s incredible.” I have to agree.