Lung cancer is the leading cause of cancer deaths world-wide and kills nearly 160,000 people in the United States every year. Our research focuses on non-small cell lung cancer (NSCLC), the most common type of lung cancer representing approximately 85% of diagnoses. Our lab’s mission is to ease the global burden caused by lung cancer through 1) identifying the biological contributors to lung cancer health disparities; 2) defining the molecular pathways that drive lung cancer growth and metastases, and 3) applying a “multi-omics” approach to test novel treatments in pre-clinical studies utilizing patient derived xenografts (PDXs).

Compared with all other racial and ethnic groups in the United States, African Americans are disproportionally more affected by lung cancer, both in terms of incidence and survival. It is likely that smoking, as the main etiological factor associated with lung cancer, contributes to these disparities. Additional factors may include socio-economic status, access to healthcare, geographic location, and work exposures, among others, although the precise mechanisms are unclear. My lab aims to clarify the biological differences and varying cancer-promoting exposures between African Americans and Caucasians that might contribute to lung cancer health disparities. We focus on pathways involved in inflammation and interactions between the tumor microenvironment and the tumor. As part of a multi-disciplinary team involving computational biologists, epidemiologists, structural biologists and clinicians, we are testing the functional consequences of specific mutations on tumor development and progression, and we are carrying out preclinical studies to explore novel ways to treat lung cancers harboring these mutations.

We study two stem cell signaling pathways, Notch1 and SOX9, that are essential for normal lung development, and that are dysregulated in lung cancer. Both Notch1 and SOX9 are upregulated in lung cancer compared to normal lung tissue and are associated with poor lung cancer survival. We collaborate with a multidisciplinary team of scientists to fully define how these signaling pathways drive lung carcinogenesis, with the ultimate goal of quickly translating our discoveries to clinical trials.  We determined that inhibiting the Notch pathway with a new compound, BMS-906024, increases the sensitivity of lung cancer cells to standard chemotherapy.  We also reported that Notch1 regulates SOX9 expression, and that SOX9 is a major contributor to Notch1-induced epithelial-mesenchymal transition. We then reported that increased stability of SOX9 protein leads to increased cell proliferation after exposure to DNA damaging agents, such as standard genotoxic chemotherapies. We also elucidated the molecular mechanisms leading to SOX9 instability after DNA damage, primarily through the phosphorylation of SOX9 at T236 by GSK3-beta, and subsequent ubiquitination and degradation of SOX9 after binding to the E3 ligase, FBW7. Our on-going work suggests that SOX9 works as a hub for cross-talk among major oncogenic signaling pathways, and we are studying the molecular and functional consequences of SOX9 upregulation. We have developed a mouse model to define the role of SOX9 signaling as a driver of lung carcinogenesis.

Use of “multi-omics” to test novel therapies for lung cancer 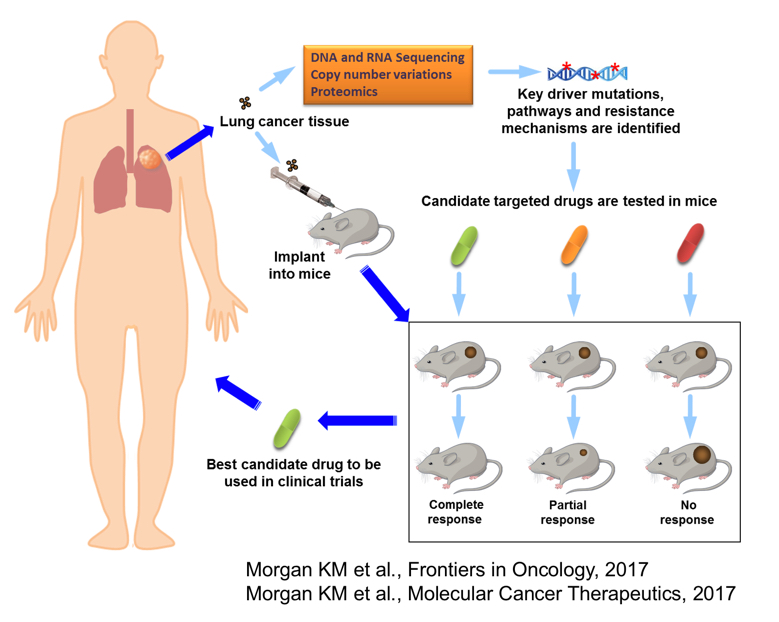 Despite recent breakthroughs in precision medicine, only a small percentage of lung cancer patients are eligible for therapy that targets oncogenic mutations. To address this, we are building and studying a tumor bank of PDXs, which more closely mirror the heterogeneity and tumor microenvironment of human tumors than classical cancer cell lines. In collaboration with other investigators at the Rutgers Cancer Institute of New Jersey and elsewhere, we are characterizing our PDXs through DNA/RNA-sequencing, copy number variation analysis and proteomics, in order to identify the best targets for therapy. We are focusing of pathways that are upregulated during therapy resistance as well as clonal evolution caused by targeted therapy. Our work is particularly concentrated on lung cancers whose genomes do not harbor clinically actionable mutations, with a long-term goal to increase the percentage of lung cancer patients that are eligible for precision medicine. 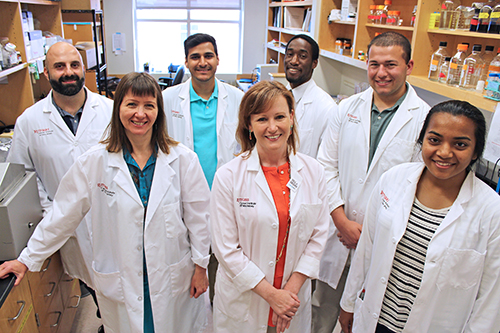 Employment Opportunities
If you are interested in working or volunteering in the Pine Lab, please contact Dr. Sharon Pine directly at pinesr@cinj.rutgers.edu.